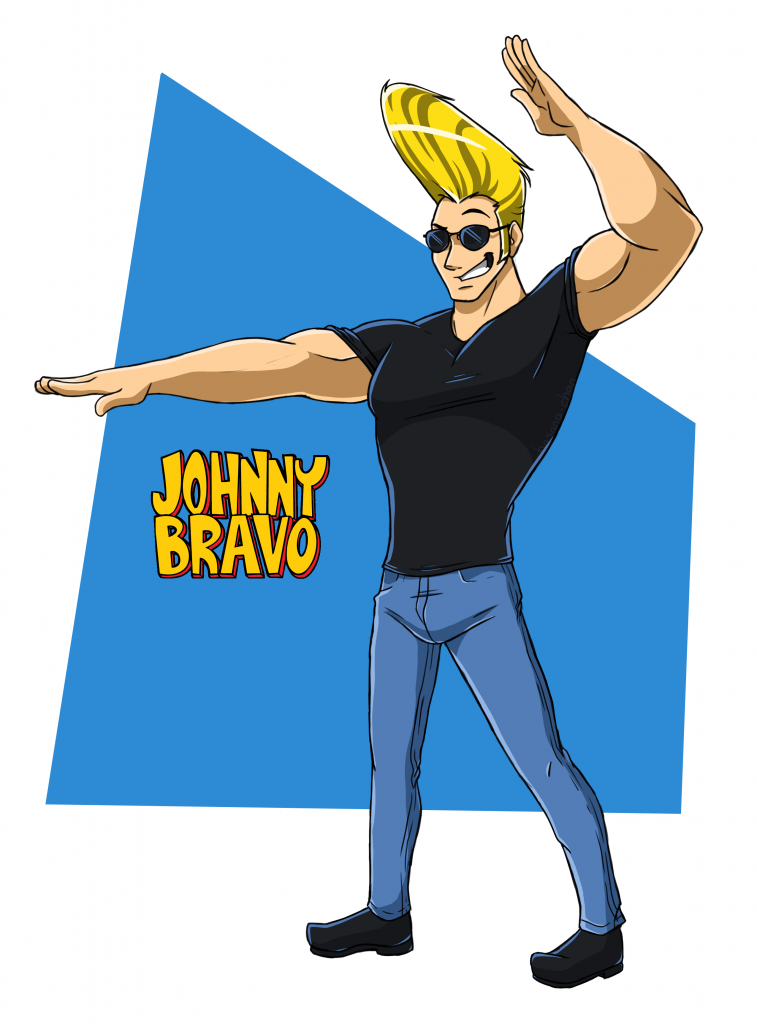 Last night, I along with one of my writer friends was doing an animation series marathon. Yes! It was super fun undoubtedly because we were watching Johnny Bravo. Just Ten episodes IN and we were in pain. A physical pain caused by laughter. Jaws hurting. Stomach aching. My friend even had tears in his eyes, Yeah! It’s weird but that’s what happens when he laughs a lot. His ribs too hurt. As biology says more work is equals to more contraction is equals to momentary muscle spasmodic pain. When you laugh hard you put different muscles in your stomach, chest wall, neck and mouth to work. But believe me all that suffering was worth it. With eyes flooding happy tears, and unable to stop his laughter, my friend casually asked me, where was this weirdo born? That was it. It triggered the thought train in my mind, just like the NZT pill does to the hero in Limitless.

Now like a domino effect, this conclusion propelled me to my next question which was, precisely, if Johnny Bravo was to be born in Indian writer’s head, would he have been the same or different to which the answer was relatively simple, offcourse he would be different. But that’s not the point. The best part to explore is if Johnny Bravo would have been the same as Van made him, would he have worked miracles in India just like the way he did in west? Now, hang on my fellow reader friends, that brings us to my next important question… are we Indians as animation audience ready for such characters and shows?

Well, here’s what I think – With all due respect to the makers and watchers of animation in India, we are nothing but a monetarily cheap animation outsourcing hub. That’s about it! We are skilled, talented LABORS. Yes! You heard me right – we are just skilled labors who work for the world, making their shows better and better.

Now, it would be completely wrong to say that we are not doing anything about it. We are taking a baby’s step in creating our own IPR’s but that’s not enough. The hunger is just to make our own shows but what about the international standards and quality. I’ve learnt to think global but act local. Yet we are in the same rat race of convoluting and limiting our creativity to mythology and Indian culture which for some reason is just in the villages (pun intended). Why can’t we have cool urban characters, with more profound themes, more fantastical settings and all universal in appeal?

I did discuss this concern within my small circle of wonderful friends and acquaintances who I must say vary from creators to writers to animators to studio people and they all had one common answer – Indian kids are not yet ready for such stuff. Which bothers me furthermore, why do we have to relate everything to kids, what about teenagers, what about adults who want to watch shows which can give them a break from their mundane kind-of boring life. Well, that’s like an age old question for me by now.

Anyways, coming back to my first belief – Characters like Johnny Bravo are not born, they are made. Now think about it, in the military they give medals to people who are willing to sacrifice themselves that others may gain. However, in business we give bonuses to people who are willing to sacrifice others so that we may gain. We have it backwards. Okay I agree it’s a tangent example but if you stay with me for a little while and travel a little deeper you shall agree with me. We human animals are not strongest not smartest but what is that kept us alive, kept the homosapiens alive from other species since stoneage just one thing – Endurance. Human animal is made for Endurance. And what kills our endurance in today’s world is just one thing, Negativity.

Negativity is like viral misery. We cannot spread sunshine and lightness in the world with negativity around us. Let’s change because as they say change is the only constant thing. During my tete-a-tee with people in regards to make such cool shows like Johnny Bravo in India, one of the second common answers was about with regards to demand and supply. Yes! You got it, that came from studio folks. If there’s no demand why would we supply. Our audience is not ready for such show is what they kept repeating.

Now, yet again, I would like to have your permission to go a little tangent and give an example of our politicians. You are still with me, thanks! So, you all my lovely reader friends must have noticed that we vote for politicians with lower voices. Ohh you haven’t, now next time please observe yourself before you vote. Believe me, it’s actually true, psychologically to be precise, for one simple reason – we associate with depth, with power and authority. Subconsciously we relate with the depth of the man’s voice. Voice matters a lot, in both real and reel life. Now merge this example with our demand and supply equation; did we demand for a lower voice, no infact we like to hear speeches which are loud but subconsciously we root for the lower voice, similarly our Indian shows are loud enough to make their grand entry fall in our ears asking us to welcome them but subconsciously we are looking for low voices but with depth. And that’s the reason we watch foreign animation shows and movies here in India. The same audience, same people spend 400 rupees to watch quality animation movies told in best story telling way possible, in cinema halls, why… because their subconscious wants it.

Well, that’s the idea worth spreading. Thoughts influence actions. There are already enough people saying no you can’t do it or there’s no need and you might think why we should add on to the list with our own selves. I would say get self affirmation. I am the captain of my ship and master of my fate that’s my affirmation. Ignore when all the naysayers are bad and catch them when they are good. Goodbye and stay animated.